While working on this lengthy project, the translator realized that excellent, self-contained biographies of Ivan the Terrible and Boris Godunov could be excerpted from the History. The first of these is 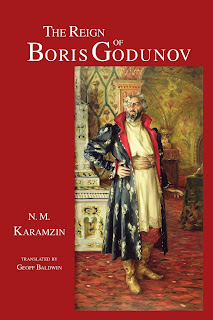 To the extent that people are familiar with Boris Godunov at all, it is usually through Musorgskii's opera of that name. Many will be surprised to learn the he was an actual historical character. Indeed: he ruled Russia from 1584 to 1605, first as regent, later as tsar. He was a consummate political operator and a fascinating character - a bit like a real-life Macbeth.

Concerning The Reign of Boris Godunov, Richard Pipes, Baird Professor Emeritus of History at Harvard University had this to say:

"Nicholas Karamzin (1766-1826) was Russia's first professional historian. His twelve-volume History of the Russian State which came out serially between 1818 and 1829 was the first work to acquaint Russians, who had just defeated Napolen's armies, with their traditions. It has bever been translated into English. Mr. Baldwin has undertaken the formidable task of filling this gap. The Reign of Boris Godunov, the story of Russia's ruler at the end of the sixteenth and beginning of the seventeenth centuries, is an excerpt of this massive publication. The translation is both accurate and fluent and should give readers a rare glimpse into Russia's remote past."

During the translation of the History, a considerable amount of material relating to Russian law was excerpted. If an academic with interest and expertise can be found to provide historical context and legal commentary, a future monograph may be forthcoming, to be entitled Karamzin on Early Russian Law.

In the future this site will have ancillary material and a moderated discussion.
Posted by Geoff Baldwin
Email ThisBlogThis!Share to TwitterShare to FacebookShare to Pinterest
Newer Post Home